You are using an older, unsupported browser. Please visit this link to contact us.

NEW YORK, NY / ACCESSWIRE / May 15, 2019 / Global Self Storage, Inc. (NASDAQ: SELF) a real estate investment trust which owns and operates self-storage properties, reported results for the first quarter ended March 31, 2019. All quarterly comparisons are to the same period from 2018 unless otherwise noted.

"In Q1, we saw strong same-store revenue growth which drove a significant increase in same-store net operating income," said Global Self Storage's president and CEO, Mark C. Winmill. "Since our inception, we have always avoided markets with new supply problems. This has enabled us to experience above-average growth in rents due to favorable supply and demand dynamics. In addition, through our various marketing initiatives, we can continue to attract high quality, long term tenants who we expect will be storing with us for years. The company's average tenant duration of stay was up 3.5% to about 3.0 years at the end of Q1.

"As our results demonstrate, we're continuing to bear the fruits of our differentiated strategy of focusing on underserved secondary and tertiary cities in the Northeast, Mid-Atlantic and Midwest which have exhibited more muted and slower supply growth than the top MSAs.

"We plan to soon break ground for the expansion of our Millbrook, New York location, which is designed to add 16,500 gross square feet of climate-controlled units. We expect construction to be completed by the end of this year.

"Initially the expansion will be dilutive to FFO, AFFO and earnings; however, we have enjoyed robust demand for climate-controlled units at Millbrook and we believe it will lead to a successful lease-up. Once stabilized, we expect the expansion to be accretive to FFO, AFFO and earnings. Our untapped $10 million credit facility will support this expansion project, as well as provide us the flexibility to acquire additional properties that we can enhance through our professional management and best practices.

"For the remainder of the year, we will continue to enhance our performance by utilizing our revenue rate management program and expanding our total leasable square footage. We are also actively exploring acquisition opportunities within secondary and tertiary cities in the Mid-West, Northeast and Mid-Atlantic.

"We are also continuing to explore the possibility of executing certain joint venture self-storage property investments as well as launching a third-party property management platform designed to provide an additional recurring revenue stream.

"Given our momentum coming out of the first quarter and our proven, differentiated strategies, we believe Global Self Storage remains on track for another solid year of growth."

Total revenues increased 7.4% to $2.1 million in the first quarter of 2019, as compared to $2.0 million in the same period last year. The increase was primarily attributable to the additional income from the Merrillville expansion and increases in rental and occupancy rates across nearly all of the company's stores. The increase was also due to additional 'other property related income' due to increased insurance participation and higher average occupancy.

Total operating expenses increased 9.9% to $1.8 million, as compared to $1.7 million in the same period last year. The increase was primarily attributable to the increased expenses associated with increased property tax expenses and higher store level employment costs. The company continues to appeal property tax assessments. However, there is no guarantee that such assessments will be reduced.

For the first quarter of 2019, same-store revenues increased 7.4% to $2.1 million compared with $1.9 million for same period last year. The increase was driven primarily by existing tenant rate increases.

Same-store operating expenses in the first quarter increased 7.9% to $913,000 compared with $847,000 in the same period last year. The increase was primarily driven by increased property taxes and higher store level employment costs.

Same-store NOI increased 7.0% to $1.2 million compared with $1.1 million for the same period last year. The increase was due primarily to an increase in revenues.

General and administrative expenses totaled $556,000 in the first quarter of 2019 compared with $465,000 in the first quarter of 2018. The increase was primarily driven by a provision for taxes in the company's taxable REIT subsidiary and increased employee compensation expense, including stock-based compensation relating to a one-time cumulative vesting of performance-based stock awarded in 2018.

FFO decreased 14% to $385,000 or $0.05 per diluted share, as compared to FFO of $450,000 or $0.06 per diluted share in the same period last year. The decrease was due to increased property tax expenses, and general and administrative expenses (as described above).

(1) For purposes of calculating FFO and AFFO per share, unvested restricted stock is not included.

About Global Self Storage

This press release contains certain non-GAAP financial measures. FFO and FFO per share are non-GAAP measures defined by the National Association of Real Estate Investment Trusts (NAREIT) and are considered helpful measures of REIT performance by REITs and many REIT analysts. NAREIT defines FFO as a REIT's net income, excluding gains or losses from sales of property, and adding back real estate depreciation and amortization. FFO and FFO per share are not a substitute for net income or earnings per share. FFO is not a substitute for GAAP net cash flow in evaluating the company's liquidity or ability to pay dividends, because it excludes financing activities presented on the company's statements of cash flows. In addition, other REITs may compute these measures differently, so comparisons among REITs may not be helpful. However, the company believes that to further understand the performance of its stores, FFO should be considered along with the net income and cash flows reported in accordance with GAAP and as presented in the company's financial statements.

AFFO represents FFO excluding the effects of business development and acquisition related costs and non-recurring items, which we believe are not indicative of the company's operating results. The company presents AFFO because it believes it is a helpful measure in understanding the company's results of operations insofar as it believes that the items noted above that are included in FFO, but excluded from AFFO, are not indicative of its ongoing operating results. The company also believes that the investment community considers its AFFO (or similar measures using different terminology) when evaluating the company. Because other REITs or real estate companies may not compute AFFO in the same manner as the company does, and may use different terminology, the company's computation of AFFO may not be comparable to AFFO reported by other REITs or real estate companies.

The company believes net operating income or "NOI" is a meaningful measure of operating performance because it utilizes NOI in making decisions with respect to, among other things, capital allocations, determining current store values, evaluating store performance, and in comparing period-to-period and market-to-market store operating results. In addition, it believes the investment community utilizes NOI in determining operating performance and real estate values, and does not consider depreciation expense because it is based upon historical cost. NOI is defined as net store earnings before general and administrative expenses, interest, taxes, depreciation, and amortization. A reconciliation of this measure to its most directly comparable GAAP measure is provided later in this release.

NOI is not a substitute for net income, net operating cash flow, or other related GAAP financial measures, in evaluating the company's operating results.

The company considers its same-store portfolio to consist of only those stores owned and operated on a stabilized basis at the beginning and at the end of the applicable periods presented. We consider a store to be stabilized once it has achieved an occupancy rate that we believe, based on the company's assessment of market specific data, is representative of similar self-storage assets in the applicable market for a full year measured as of the most recent January 1 and has not been significantly damaged by natural disaster or undergone significant renovation or expansion. The company believes that same-store results are useful to investors in evaluating the company's performance because they provide information relating to changes in store-level operating performance without taking into account the effects of acquisitions, dispositions or new ground-up developments. At March 31, 2019, the company owned 11 same-store properties and zero non same-store properties. The company believes that by providing same-store results from a stabilized pool of stores, with accompanying operating metrics including, but not limited to variances in occupancy, rental revenue, operating expenses, NOI, etc., stockholders and potential investors are able to evaluate operating performance without the effects of non-stabilized occupancy levels, rent levels, expense levels, acquisitions or completed developments. Same-store results should not be used as a basis for future same-store performance or for the performance of the company's stores as a whole. 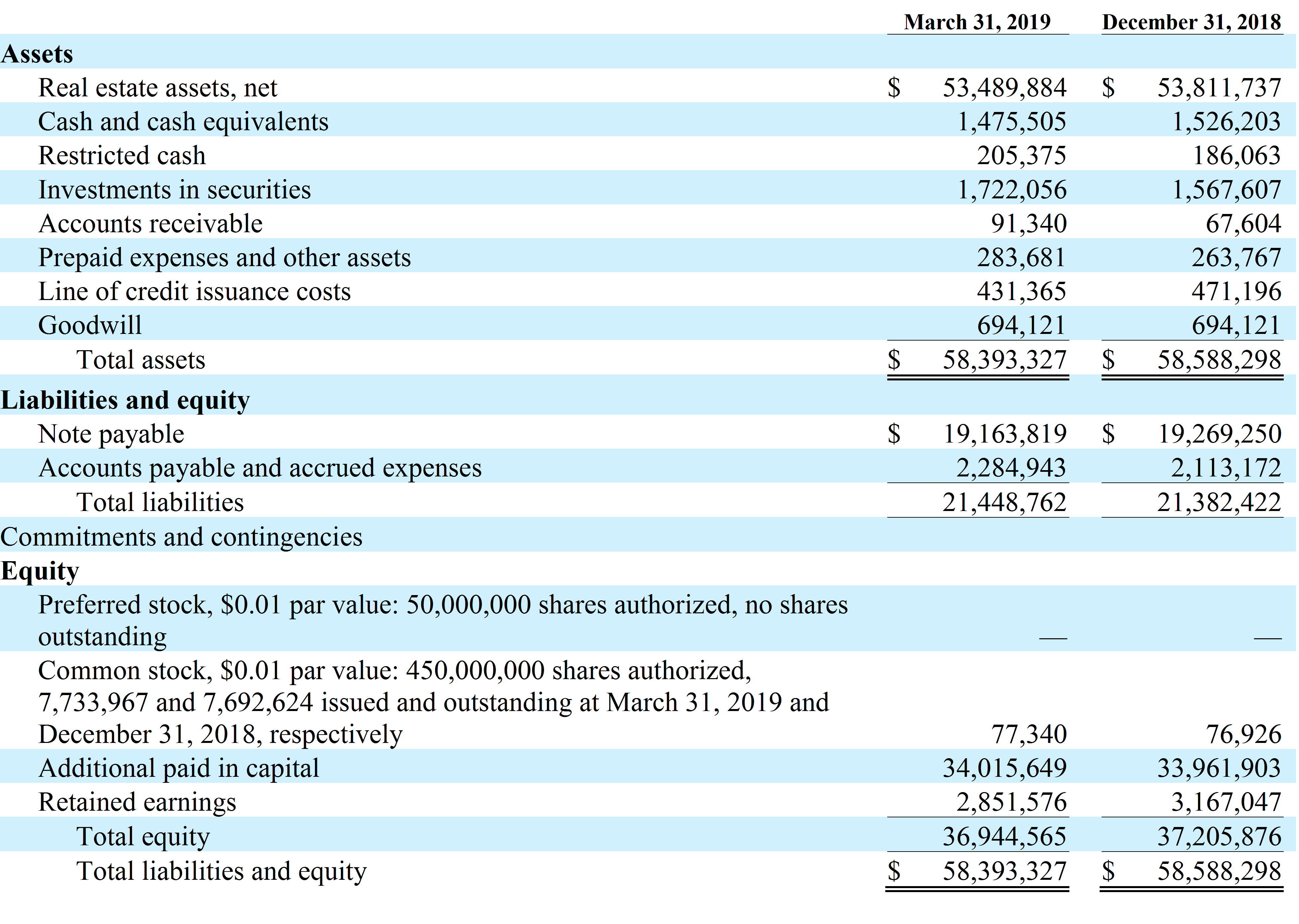 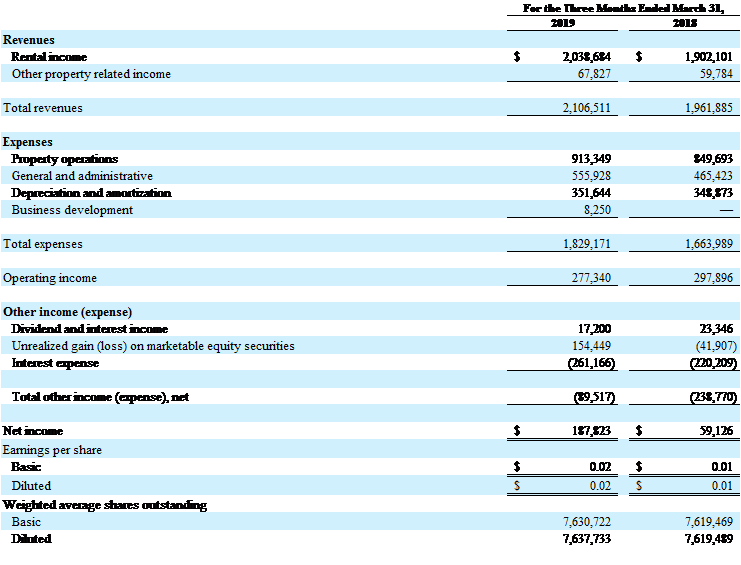 The following table presents a reconciliation of same-store net operating income to net income as presented on the company's unaudited consolidated statements of operations for the periods indicated: